My grandfather passed away when I was just 3 years old, so I never heard his stories.

What a wonderful gift, then, that Art set so many of his childhood memories to rhyme. A common character is named “Sassafras John,” who inspired one of my favorite verses:

A man in his eighties … a boy in his teens,
Both knowing of friendship … and all that it means,
A boy lookin’ forward … a man looking back,
Both sharing the gloom of that lonely old shack.

I caught my first glimpse into his vague and obscure past in the December 17, 1940, issue of the Kendallville News-Sun, where along with the war time news, I found the following front page obituary.

John Beight, 88, commonly known as “Sassafras John” and a resident of the Kendallville community, died at 4:05 o’clock this morning at the Noble County infirmary which he entered in 1934. Death was due to heart disease.

Born September 15, 1852 in Wayne Township, he was the son of Samuel and Barbara Beight. Later he moved to DeKalb County, remaining on a farm there until moving to this city in 1910.

In Kendallville, he lived a life of varied occupations, but is best known for his marketing of sassafras, making annual spring tours of the city and becoming familiar to scores of people. Always jovial and of a unique personality, he acquired many friends and acquaintances with his quaint philosophy and mannerisms.

Dean’s research goes on to say that John’s father was born in Ohio and his mother in Germanay.

As a child, my father spent hours with this kindly old man, learning the ways of the Indiana hills. The regard for nature Dad learned from him was never forgotten. It has formed the basis for much of his poetry.

The little research I’ve done myself in various genealogical databases show he was likely the seventh of eight children, several of whom might have died at birth. His mother died when he was a young child, and his father remarried and had five more children.

A couple sources suggest John was married and divorced by the time he moved to Kendallville, and he had two grown sons. Art described his house as a “shack” in an alley, a resting place for reading and chatting, when John wasn’t colorfully hawking sassafras roots all over the countryside:

One local account (incorrectly spelling the last name phonetically) alludes to the possibility John drank his profits. Whatever his background, he was a good friend to Art, and, according to our poet, to others as well.

When folks were sick an’ needed care
Ole John would all their burdens share,
An’ they would on his cures depend
Fer he wus mor’n jist a friend.

What would remain today of John Beight’s story — 160 years after his birth — had a poetic young man not taken the time to memorialize him? I think what strikes me now, reading these poems, is that Art did his friend a great service in return for the older man’s kindness. 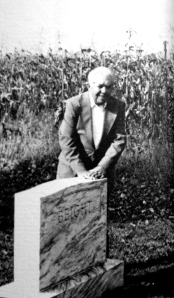